The iOptron GEM45 is a lightweight and very capable mount. It is similar to the CEM40, but with a traditional right ascension and declination axis rather than the CEM40’s center-balanced configuration. It also boasts an additional 5-lbs of payload capacity, while weighing and costing the same as the CEM40.

I have been using the CEM45 for the last year and have been very impressed with its build quality and performance. I can easily achieve 5-minute subs using a 130mm guide scope paired with a QHY5LII guide camera, while routinely maintaining an RMS guiding error between 1 and 2 arcseconds using PHD2 software.

One of the mount’s most useful features is that it remembers where it is along the right ascension and declination axes after turning it off. That’s a feature of all the iOptron GEM45 and CEM40 mounts, not just the absolute encoder models that set a buyer back an additional $1,500. All iOptron equatorial mounts are able to seek the zero position, a feature I use during every session as my last step of the polar alignment process.

The saddle is Vixen- and Losmandy-ready, which I very much appreciate since I use both.

Connectivity is very good on the mount, with two through-mount USB 2.0 ports, two 12V 3A DC 5.5/2.1mm plugs, and an ST4 guider port. I can connect two cameras, a filter wheel, dew heater, and auto-focuser through a single 4-port hub and keep all the wires above the dec axis to avoid binding cables. But is USB 3.0 too much to ask for in 2022? Cameras can easily saturate a USB 2.0 link, particularly with high frame rates, such as when taking flats and polar aligning. The iOptron GEM120 has USB 3.0, but none of iOptron’s other mounts do, including even the new hybrid drive mounts.

The GEM45 also includes an integrated polar scope, which is quite handy for users who move and setup their mounts for each observing session. Being able to quickly achieve precise polar alignment using a laptop or tablet is a big step up from previous mounts I have used. It also includes a GPS module, which makes setup a breeze.

Setting up in the field from feet down to first light can take as little as 15 minutes for an experienced user, and maybe 30 minutes for someone with only a few setups under their belt. There is also a package option with an integrated guide scope, though I prefer to run a separate guide scope. Other options include a hard case and tripod. For field users, the hard carry case is a must.

Controlling the mount through a computer using the iOptron Commander software works well nearly all the time, though there have been several occasions when an unexpected disconnection required restarting the PC to reestablish the connection. On one occasion, I needed to reinstall the driver after it became non-responsive. The implementation of ASCOM allows it to integrate smoothly with observatory automation programs like N.I.N.A. that allow me to set up, polar align, take flats, hit go, and then go to sleep. It sure beats babysitting the scope all night.

Something I find peculiar is the choice to use hex bolts in place of knobs to lock down the azimuth and elevation adjustment. Locking and unlocking the axes with hex bolts feels clumsy and cumbersome, especially in the dark. When transporting the mount, the two RA lock bolts stick out and get caught on things. The azimuth adjustment pin and the two locking bolts provide three points of contact with the tripod instead of two, but I would prefer a center post fastener like other manufacturers use. Loosening, adjusting, and retightening the bolts multiple times during polar alignment risks dropping and losing parts in the dark.

On the subject of hex bolts, there’s a neat little feature on the side of the mount. The provided hex wrench magnetically secures in the mount housing, providing quick access and making it easier to adjust azimuth and elevation for polar alignment. But this too has a bit of a quirk; the way it’s recessed up against the mount housing makes it difficult to get out with short fingernails. Pro tip, attach a rubber band to the hex wrench and voila!

Customer and technical support personnel at iOptron are quite knowledgeable and helpful. The RA housing lock screws on my GEM45 once came loose after my telescope’s light train encountered the tripod leg while I was asleep. It was my own fault; I had foolishly removed the meridian flip limits in the mount settings (which can also be useful, but dicey to mess with). iOptron support quickly replied to my email providing the steps to diagnose and solve the problem, and offered to repair it for only the cost of shipping and handling under the 2-year warranty. I decided to take on the repair myself, though. Upon disassembly, I was very impressed with the materials quality and assembly tolerances. Compared to other manufacturer’s mounts I have disassembled in the past, it is better than I would have expected for the price.

Overall, the GEM45 mount is a rock-solid piece of high-tech kit that will serve its owners well for many years and is certainly well worth the money. iOptron’s upgrade program is a useful feature I hope to take advantage of as well, as I already have my eye on one of the new iOptron strain wave mounts coming to market soon with generally better performance at about the same price.

Use of hex bolts for az/el locks

Some imaging setups and images with the GEM45 by the author 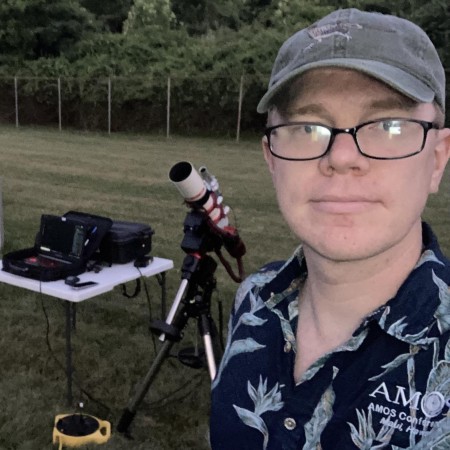 I've spent 16 years with Dept. of Defense space operations, testing, and research. I'm currently a PhD candidate in space systems engineering, and the Technical Director for a government laboratory. I love engaging with STEM outreach and education opportunities. I've also been informed I'm a "gear nut" and that I suffer from severe GAS (Gear Acquisition Syndrome). What can I say, some people like Pokémon, I like collecting photons and photon collectors.