One doesn’t always need a large, robotic go-to mount to do good astrophotography. Sometimes, a device that fits in the palm of your hand is all you need. The Vixen Polarie is one of the smaller star trackers on the market at roughly the size of a film SLR camera body, small and light enough to throw in a backpack with a tripod strapped to the side. It may not be the most sophisticated in terms of features, but it will get the job done for short-focal-length astrophotography, tracked skyscapes, eclipses, and panning time-lapses, in both the Northern and Southern hemispheres, if you are willing to take short exposures to make up for mediocre polar alignment.

The Polarie ($475) runs on either two AA batteries for about four hours, or on any 5V smartphone backup battery via its mini-USB port (my preferred method). Despite its small size and 1.5-lb (0.7 kg) weight, the specs say it can handle a camera rig up to 7 lbs (3.2 kg), which is plenty for most DSLR-lens combinations. To use it for sidereal tracking, you simply point it to the North Star, aim your camera anywhere using the ball mount, and fire away using an intervalometer or camera-control computer. Removing a screw-on plate on the back reveals a compass to help with setting up before nightfall. A plumb bob on the side tells you the elevation it is pointing to, and a boresight hole in the upper corner lets you line up Polaris with a modicum of accuracy.

There are several add-ons for the Polarie, including a polar scope, a fine-adjustment base, a top-mounted compass and level, and a mounting block and counterweight bar. I found the fine-adjustment base to be essential for not only achieving some amount of polar alignment but holding it steady. It is also quite small and lightweight. Unfortunately, each of these accessories are quite expensive.

I have used the Polarie for widefield astrophotography, tracked skyscapes, and panning timelapses. The tracking modes include sidereal, half-sidereal (for tracked skyscapes with minimal foreground blurring), solar, and lunar for both the Northern and Southern hemispheres (set via a switch in the battery compartment). I have found that using a 200mm lens or shorter was necessary to have exposure times of at least 90 seconds.

Even though poor polar alignment can limit exposure time and focal length, there are quite a few enticing wide-field targets that will work great with the Polarie. Its small size and light weight make it an ideal travel tracker, especially if you have to hike in to your location.

Despite its portability, I have ended up using the Sky-Watcher Star Adventurer far more often for one main reason: polar alignment. I don’t want to put out the extra $350 (nearly the price of the Polarie!) for the polar scope. Even with the polar scope, you must remove the camera mounting base to use it, and unless you are using an exceptionally stable and large tripod, you will undoubtedly lose your polar alignment once you remove the polar scope and re-attach the camera base and camera.

The hole through the upper corner helps with polar alignment a little bit, but it covers a patch of sky about 9 degrees in diameter, with no crosshairs or reticle to help estimate the center. The built-in compass requires you to remove a screw-on plate on the back to see it and, again, by the time you put the plate back on you are probably no longer pointing north. One of the optional accessories is a compass and altitude indicator that attaches to the camera shoe on the top, although it costs another $60.

Despite the issues with getting an accurate polar alignment, the Vixen Polarie is still a solidly-built and very portable tracker for doing wide-field tracked imaging. I wouldn’t recommend using a lens longer than 200mm, and you will need to test your exposure times carefully to see how long you can expose before significant streaking occurs. I still often use mine as a backup for my Star Adventurer for critical astronomy trips or events, or for running a second camera with a short lens. 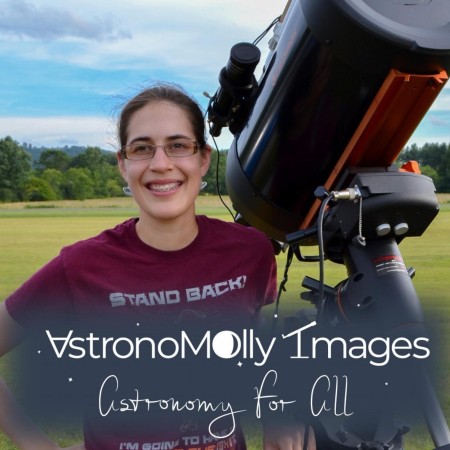 I got into astrophotography in July 2015 after receiving my first telescope as a gift. Much trial and error later, I now have three astrophotography rigs set up in my backyard just north of Berkeley, CA, in the San Francisco Bay area, including one dedicated to variable star and exoplanet transit observations. I love doing STEM and astronomy outreach, and I've accrued more than 150 hours of volunteer activities reaching over 20,000 people, both in-person and virtually. I am an AAVSO Ambassador (American Association of Variable Star Observers), an Explore Alliance Ambassador, and a panelist and broadcaster for The Astro Imaging Channel weekly YouTube show. I have a B.S. in Physics from Washington State University, and am currently pursuing my PhD in Physics at University of California, Berkeley, studying neutrinos with my two cats, Orion and Apollo.